As shown by more than 30 years of studies, the increase of awareness contributes to the increase of safety on roads. Thanks to the rollover simulator, everyone will learn about the behaviour of their body, vehicle and psyche during a rollover.

After sitting down in the rollover simulator seat and correctly fastening seatbelts, we may commence the simulation according to one of the simulation scenarios. We will quickly find out that something which may seem like lots of fun has a huge educational value. A great majority of people who exit the simulator are shocked by powerful forces which affect the passengers during the simulation which after all takes place in safe conditions and at lower speed than in case of a real accident.

One thing we often forget before setting off is to hide the loosely left objects in the trunk as they are a deadly threat in case of an accident. During the simulation, we leave safe balls in the car which easily show how dangerous unsecured objects are in the car’s cabin.

HOW TO CREATE AWARENESS IN THE TRAINEE?

impact of fastening seatbelts on safety,

how to properly fasten seatbelts,

threats linked to loose objects in the cabin,

emergency evacuation from a vehicle lying on the roof,

emergency taking the child out of the child seat from an overturned car, 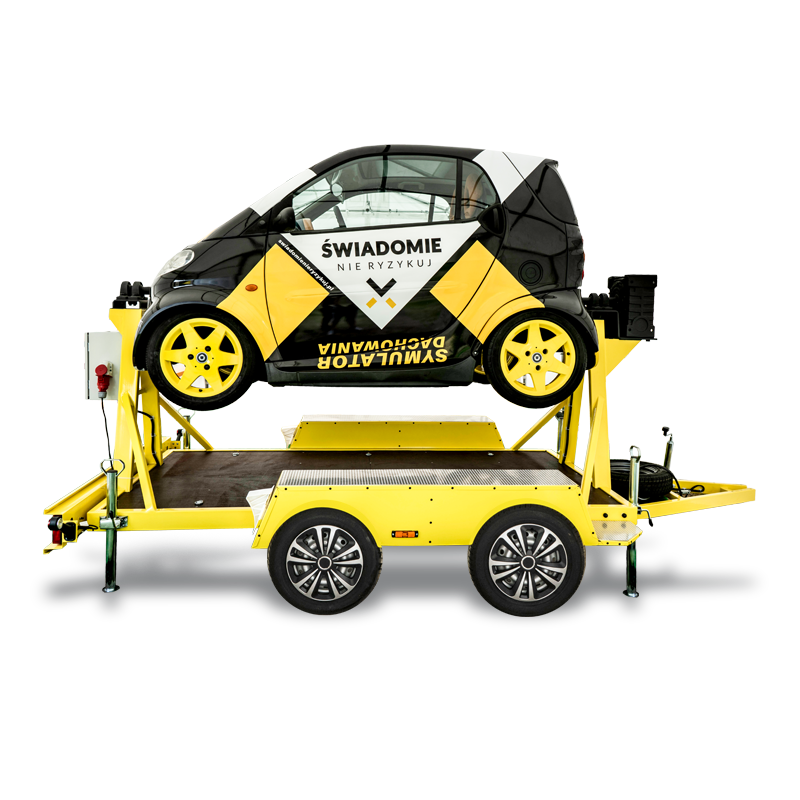 Myths and bad habits to overthrow:

seatbelts are not necessary,

unfastening the seatbelts after the rollover immediately,

leaving loose objects in the cabin,

learning how to fasten seatbelts properly,

Practice of emergency evacuation from the car after rollover,

Practice of emergency taking the child out of the child seat.

Simulation on: the trainee
Demonstration time: 10 – 15 minutes
Number of supporting trainers: 1
It is worth to combine the training with:
– airbag simulator,
– crash simulator,
– simulator of decision-making response time.

Why the Liberti simulator?

Simulator is available in several versions:
– for two or four passenger car,
– in stationary version or mobile version on the trailer.

Press the contact button and send us a message. We will respond as soon as we can.

Ask about a product!